Through the Ashes DLC is out!

Since the release of our last DLC, Inevitable Excess, we’ve been busy addressing your feedback and releasing patches and fixes for Pathfinder: Wrath of the Righteous. We’ve also been hard at work on our second story DLC, Through the Ashes, and today we are excited to announce that it’s just been released! It’s currently available on Steam, GOG, and the Epic Games Store. The whole Season Pass is on sale now, and you can purchase this DLC with two other premium DLCs altogether for 25% off. The game itself also features a sweet 35% discount in case you still don't own it.

Now back to the new DLC. 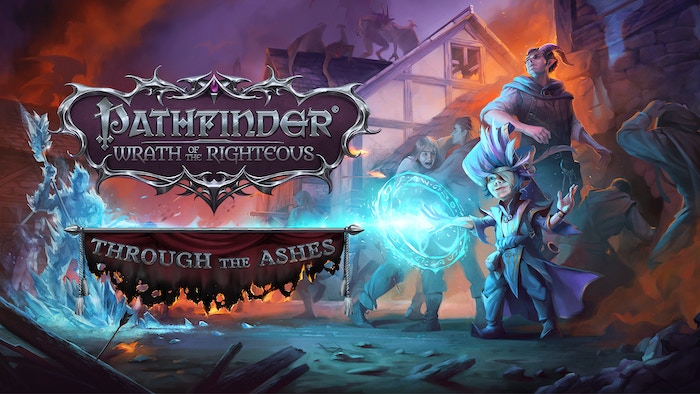 Through the Ashes is an entirely distinct experience from the main campaign and the previous DLC, where you played as a hero imbued with incredible powers. This time, you will take on the role of a regular person, a citizen of Kenabres, who managed to survive Deskari's attack on the city. With extremely limited access to resources, no decent weapons, and no safe place to rest, you must focus on survival, think strategically, use the environment against the strongest of enemies, and try to lead your small group to safety while danger awaits around every corner. You will meet two new companions and a number of helpful NPCs who won’t join the fights but may be helpful with other tasks if you learn their strengths and weaknesses. Hide, scout, and use everything you can find to lead your new friends through the ashes of Kenabres.

To start playing this DLC, you need to have either the Season Pass or Through the Ashes DLC separately in your library along with the main game. You can access the new campaign from the main menu when you start a new game. After you complete the DLC, you will be able to import the results into the main campaign.

But that’s not all—we want to share some of our future plans with you as well! As we write this, part of our team is already working on the next DLC, and we expect to release it in July. We’ve also decided that we don’t want the 3rd DLC to be our last! Your adventures will continue with Season Pass 2, which will be available in Fall 2022. Season Pass 2 will consist of three new DLCs, bringing even more new content to the game. We will share more details later this year.